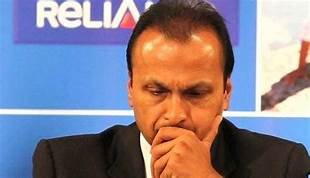 Anil Ambani, once the sixth richest person on earth with a net worth of 42 billion dollars is now struggling to pay off the neck-deep debts he is immersed in. His legal team has said that his net worth currently is zero and the Ambani family has not come to his rescue at a UK court.

A Chinese bank called Industrial and Commercial Bank of China Limited has claimed to the court that Ambani has breached personal guarantee and has failed to repay the ban a debt of 680 billion US Dollars of the 925 billion US dollars he had borrowed as a refinancing loan from the bank. Anil’s argument was put forward by his lawyer Harish Salve. The court, however, is reluctant to believe that his worth, along with his liabilities, has turned to zero within a timespan of few years.

This has opened the door for the opposition to ask him to account for his collection of luxury cars worth 4.2 million dollars, the private jet  and helicopter he has reportedly presented his wife Tina Ambani as a gift and a two-storey house at Mumbai’s Sea Wind building at Cuffe Parade. According to Ambani’s legal team, the ownership of these assets are with corporate entities and her not a part of his personal possessions.

After Dhirubhai Ambani passed away in 2002, a difference of opinion started between the Ambani siblings regarding the ownership of their father’s billion dollar empire. While Mukesh Ambani only got oil, gas, petrochemical refining and manufacturing portions of the Ambani assets, Anil received the major portion of the Reliance empire including the new-age telecom business, financial service, energy and infra arm. Yet, Mukesh rose to the rank of one of the richest person in Asia and Anil continues to try to prove his alleged bankruptcy.