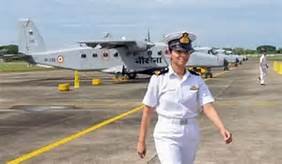 Flight lieutenant Shivangi Singh is all set to  soar high with the new-age lethal Rafale aircraft, after mastering the older MiG-21 Bison. According to sources, flying the old MiG 21 Bison requires more effort than the easier and technologically advanced Rafale aircrafts. Hence, pilots of the Rafale are made to undergo a conversion training where they are trained to fly the MiG 21 bison. Singh is the first woman officer as of now to ace the training.

Singh, who hails from Varanasi in Uttar Pradesh will now join the Golden Squadron where she will be completing her training to fly the 4.5 generation Rafale Aircrafts at Ambala Base camp for the Indian Air Force. Flying a Rafale aircraft will be a matter of ease for Ft Lt Shivangi Singh who is well trained with MiG 21 which has the highest landing and take-off speed at 340 kmph.

She was deployed in a forward fighter base at Rajasthan before she joined the training to become a part of the Golden Squadron.  In the base, she used to fly beside Wing Commander Abhinandan Varthaman who had been held captive in Pakistan after the Pakistan Military force shot down his MiG 21 aircraft for a few days.

Before Singh, Flt Lts Avani Chaturvedi, Bhawana Kanth and Mohana Singh, who were the first woman to fly aircrafts for the IAF in 2016 . They had shattered the glass ceiling for women in militia in the country and were first to break the rules that said women cannot fly in open combats.